When Heather challenged me to a Pumpkin Pie Ice Cream duel, I had to accept. She had mentioned how last year she had tried to make the concoction with coconut milk rather than dairy, so I figured I should abide by the same general rule. I immediately ruled out coconut milk due to her previous research, and knew that my recipe would not contain milk, cream, or eggs. 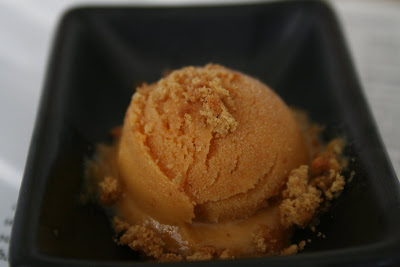 I used Libby's Pumpkin Pie Mix (I have literally had it sitting in my pantry for a year now) and soy creamer as my base ingredients. Since the pumpkin itself is already thick, I wouldn't have to do much to change the thickness. In retrospect I wish I had added some rum to the mix to make the outcome softer...but then again it would have effected the overall flavor. I'll definitely try this one again, but I think it was a great first start.

In the end my recipe went a little something like this: 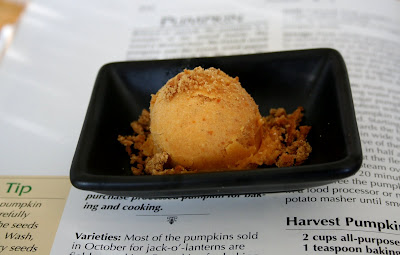 Whisk all ingredients together and churn in ice cream maker until thick. Freeze until solid.

Tastes magnificent with gingersnap cookies to go with it....crumbled on top or used as an ice cream sandwich!