My frustrations with soy milk bases drove me to choose another dairy-free option: coconut milk. I had never worked with it before, so while shopping I wasn't sure if I should use pure canned coconut milk or the drinkable coconut milk beverage. I could see the advantages to both:
Canned Coconut Milk: Essentially as pure as I'd be able to get it, naturally thick, cheapcheapcheap
Coconut Milk Drinking Beverage: Closer consistency to real milk, less coconut flavor
So I got both. This is an experiment after-all! After much conversation with folks, I decided on white chocolate-almond as the flavor. 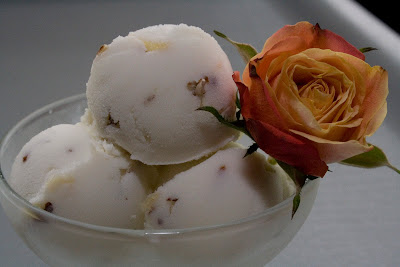 I melted the white chocolate and folded in the canned coconut milk. It still tasted a LOT like coconut so I added another bag of white chocolate. It. Was. GOOP. Slimy, sticky, tasty goop. Goop that refused to freeze. It wasn't til I looked over my equation that I realized what had happened....my white chocolate content was DOUBLE that of my coconut milk! Oh, the embarrassment! AND the frustration! I had finally gotten it to the point where I could actually TASTE the white chocolate! For that reason, I decided to thin it out using the coconut milk beverage. That way I could get it to the proper consistency without compromising the white chocolate-y flavor I was aiming for. The third churn was finally a success resulting in a relatively creamy (yet still mildly ice-y...I blame the drinking beverage) final product.

In the future, I think I will stick with just the canned coconut milk and create a flavor combination that will either a) better mask the coconut flavor or b) compliment the coconuttiness. I have a feeling that if I had used dark chocolate I would not have run into this problem.

Here is the post-goop recipe (with some edits upon taste-test): 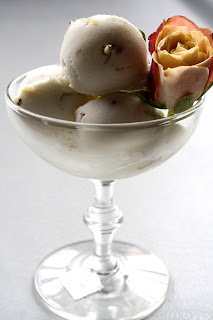 In a double boiler, melt white chocolate with agave. Mix in coconut milk and coconut drinking beverage. Cool. Churn. During the last 3 minutes, add the cooled toasted almonds. Freeze until firm and enjoy!