With my recent addiction to soy milk, I wanted to try making dairy-free ice cream. Again, being big on utilization, I tried to find the recipe that had most of what I had at home. I ended up finding Ice Cream Freaks' chocolate soy ice cream recipe, and played around with it.

My theory was that the thickness of my dairy-free organic chocolate syrup (which is MUCH thicker than Hershey's) would partially make up for the thinness of my vanilla soy milk that had replaced the soy creamer called for in the recipe. Sure, it might be a ridiculous assumption, but this is science...you try it out, and if it doesn't work? Try again!

While checking my ingredients to be sure that they were dairy-free (and...as it turns out...vegan!), I took a glance at my dark chocolate chunks that I had purchased for my Matcha Mint ChocoChunk experiment. I literally shouted because GUESS WHAT? I can eat them! For those who don't know, I have an obscure, ridiculous chocolate allergy that means I can't eat cocoa powder, but CAN have chocolate liquor and cocoa butter. I think I might revise this recipe at a later date to incorporate more Kelly-friendly chocolatey goodness :) Also, while one might thing it would be more beneficial to use chocolate soy milk, I think it would have over-chocolatafied the recipe. 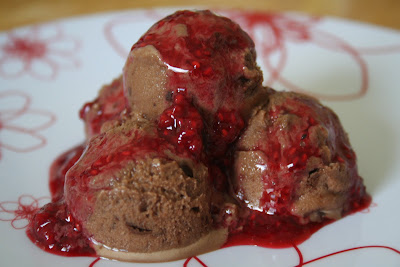 In a blender or food processor, combine all ingredients except chocolate chunks. Blend until fully incorporated. Churn in ice cream maker until thick, approx 30 min. While ice cream is churning, cook soy milk and chocolate chunks in a double boiler until the chocolate is completely melted and thinned by soy milk. Set aside to cool. Once ice cream base has gotten thick, add chocolate chunks and allow to incorporate. Stop machine, and fold in chocolate sauce until swirled into ice cream. Put in freezer proof containers and freeze until solid.

I paired this ice cream with a raspberry coulis (made with agave instead of sugar) which balanced the sweet and bitter quite nicely. I think that without a berry-centered sauce, the ice cream might be too bitter for some people.