Let's bring a little science back into this, shall we? All this cooking out of cookbooks is making me antsy and frustrated. ESPECIALLY since I find myself holding grudges against the authors for their recipes. Don't get me wrong, I understand the effort and skill it takes to formulate recipes...but damn, these formulas cannot seem to get on my good side. The thing of it is...they are great concepts. The flavor combinations are spectacularly unique and beautiful, but the recipes themselves are just "meh." So I'm going to take a break to fulfill a request. 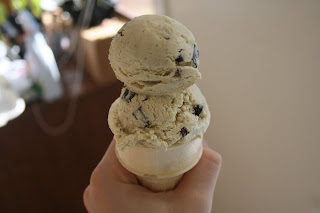 Gennyfer brilliantly suggested Green Tea Mint Chocolate Chip Ice Cream as my next endeavor. It seemed less intense than the Chocolate Jalapeno that Heather had suggested, mostly because I already had most of the ingredients in my home....so I gave it a go. I decided to combine two recipes. Fer Food's Green Tea Mint Chocolate Chip and Ma'Ona's Matcha Ice Cream recipe. This would take my love for custard base ice creams and infuse it with the flavors I desired to be in my ice cream. Butterflies in belly, I began the process. I was quite nervous because my ice creams have mostly felt like failures lately, and I had such high hopes for this one. 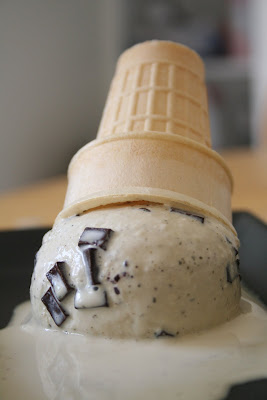 In a heat-proof bowl, whisk together egg yolks and sugar until thick and fluffy. In a heavy based saucepan heat half and half, matcha, and mint until almost simmering. Temper dairy into yolk mixture and return to pan. Heat, stirring constantly, until mixture begins to thicken. Remove from heat, and allow to cool. Strain repeatedly until the ice cream base no longer has herbs in it. Spin in ice cream maker until thick. Add chocolate chunks in during the last couple minutes and allow to churn until incorporated. Transfer to freezer-proof dish and freeze until firm.

"How'd it turn out?" You ask? Phenomenal. The texture is PERFECT. The matcha is rather subtle because the mint intensified while I let my base chill overnight...but because I used dark chocolate chunks, my cocoa counterpart put up quite a fight against the peppermint avenger. What I like most about it is that there isn't much separation in flavor. Like with the Peach Cardamom, it literally infused into one new flavor compound rather than "Oh, here's the mint...And now I taste the chocolate...Oh! And there's the matcha flavor!" I think the recipe would be just fine with a more mellow chocolate, but the dark was certainly no problem. I am very excited to share these samples for some feedback :)