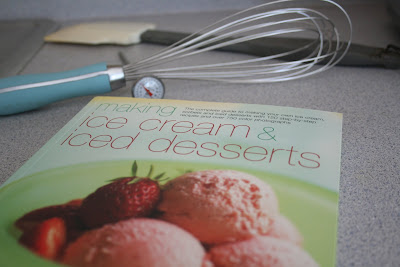 The first book that I have chosen for my never-ending experiment is called Making Ice Cream & Iced Desserts by Joanna Farrow and Sara Lewis. Out of every ice cream book at Border's, this was the only one that had unique recipes. Yes, I get it, people like basic chocolate ice cream...but how do you expect me to grow as an ice cream artist with traditional flavors alone?! Give me some weird shit like lamb chop & trout sorbet or cow's tongue gelato! Sure, it sounds disgusting and would probably never sell, but that's what science is! Experimenting, playing with the compounds and molecules that make up every single thing in existence...the epitome of "you don't know 'til you try it."

Making Ice Cream & so forth is really great because the first few pages are actually educational. Information on the history of ice creams, flavors, methods...and have you ever realized that most cultures have some sort of "iced" dessert? Back when there weren't machines, people found ways of cooling off and enjoying food at the same time. It's said that back in Ancient Rome, Emperor Nero sent his slaves to collect snow that would be combined with fruits and honey before its inevitable consumption. Brilliant! The development in ice cream technology transformed as modern cooking and appliances did. Who knew that there was such history behind that silly iced-custard!

In addition to the history, there is information about spices and flavorings to use in ice cream, storage, equipment, and tips on the processes themselves. What probably hooked me most is the section on garnishes. I think that trying to create accompaniments has been one of my greatest struggles in this project. I anticipate that I will attempt all of them before I move to the next book, and hopefully many, many times after.