I thought this recipe would be an interesting place to start. I have made peach sorbet in the past, but didn't add enough sugar so it over-hardened. You see, one main difference between ice creams and sorbets is how sugar effects the texture. While too much sugar will make your ice cream hard as nails, it will make your sorbet super smooth and delightful. I thought that using yogurt would be an interesting and welcome change, and would give me the opportunity to see what exactly it does to the chemistry of the ice cream.

I think that this recipe may have been the easiest I have ever tried. There were a few occasions, though, where I think some handholding would have been appreciated. For example, it wasn't until I referred to the spices section that I knew whether or not to add the cardamom shell in addition to the seeds...nor was I positive that I should leave the skins on the peaches. I know that it probably would have said to peel them if that's what it meant...but I still like to see some reassurance in there. 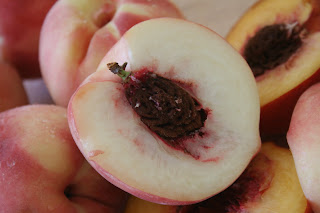 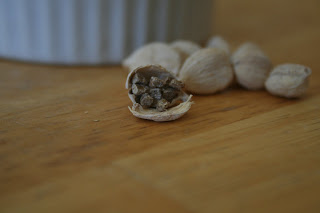 I found it intriguing that rather than creating a custard as I do with my other ice creams, I instead made a sorbet base and folded in the yogurt once it was spun. It does mean, however, that if I messed up during the spinning process I can't just melt it and start over. I would literally have to start from the beginning again. The following recipe is not written the same as it was in the book. While the ingredients & measurements are the same, the exact wording in the instructions is different.

Crush the cardamom pods. Combine both pods & seeds with peaches, sugar, and water over medium heat. Simmer, stirring frequently, until peaches are softened. Puree in blender and put through strainer. Chill. Spin the puree in ice cream maker until thick. Scrape into a bowl and gently fold in yogurt until incorporated. Freeze until firm enough to hold a scoop shape. 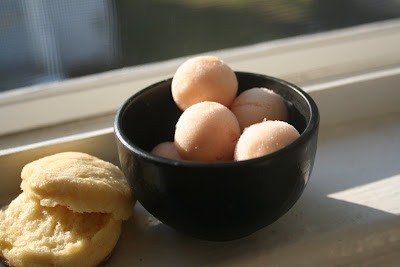 The flavor is very light. Rather than tasting the peach and cardamom separately, they sort of infuse to make a new flavor altogether. The texture is kind of weird, though. This isn't really an ice cream that you can sit on the couch with and eat right out of the tub...it's perfect for melon-balling or artistic looking scoops. I am wondering if adding more dairy would have made it smoother, but am concerned that more yogurt would have taken away from the unique flavor. 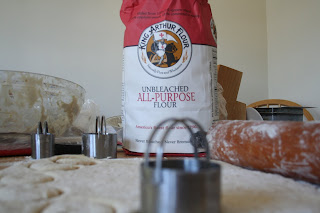 It didn't take too long for me to decide what I would like to make as an accompaniment to this ice cream. There is a biscuit recipe that I photocopied in 6th grade that I have never, ever made. What always stopped me? Yeast. Well, actually it was the laziness...but I was always put off by the fact that I would need to use yeast in the recipe. I just so happened to have a packet laying around and found it to be the perfect occasion to make these.

Dissolve the yeast in the warm water & bloom 5 min. In a large, separate bowl, combine flour, sugar, powder, soda, and salt. Cut in the shortening until mixture resembles a coarse meal. Add yeast water and buttermilk and stir until just moist. Cover and chill for 1 hr. Preheat oven to 450*. Turn dough onto heavily floured surface; knead 5 times. Roll dough to 1/2" thickness and cut with biscuit cutter. Place on a cookie sheet with parchment or pan spray. Brush the melted butter over the top, and sprinkle with a little bit of sugar. Bake at 450* for 12 min.