Allow me to begin this with a resounding BOO! to this recipe. 1) I hate using cornflour in recipes. It alters the flavor, screws with the texture, and just...yuck. 2) Saffron? No. Not in ice cream. Never again. I didn't use the 1/2 tsp it called for because saffron sells for $85/oz. My chef let me snag a pinch of saffron from work, which was enough to flavor the ice cream but not really to color it. Thank God, because it is just not okay. The apricot, however, is amazing. Somehow the flavor was completely saved by favorite dried fruit, and all was well.

The one good thing about this recipe was that I accidentally curdled my cream. "How the hell is that a good thing?!" you may ask, BUT this book happens to say how to rescue curdled cream! And it works! All I had to do was plunge my bowl of custard into an ice bath and whisk until it stabilized...which only took like 30 seconds. I was quite fearful that the texture would not turn out okay, but I think it be the best texture I've discovered yet. 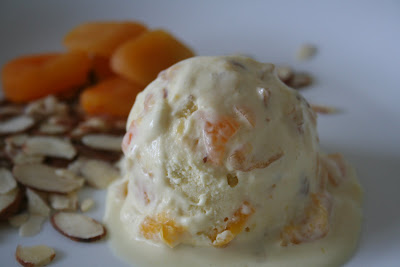 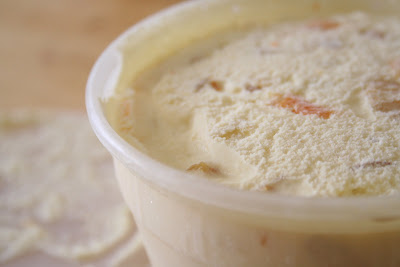 Chop apricots into small pieces and put into bowl. Add orange liquor and allow to sit while making custard. In a small bowl, add saffron to the boiling water. Whisk together yolks, sugar, and corn flour together in a separate bowl. Pour milk into a pan and simmer. Temper milk into egg mixture and return to pan. Cook until thick, being careful not to boil. Add saffron and chill until very cold. Stir in heavy cream and churn until thick. Add apricots and almonds and churn until incorporated. Spoon into plastic container and freeze overnight.

While I still hold a bit of resentment for this ice cream, it is not as wretched as I expected it to be.