Why not make it a little simple today, huh? Making Ice Creams and Iced Desserts has quite a few recipes that require vanilla ice cream as the base...so why not make a batch? Two birds, one stone...you know what I'm saying.

I'm used to using traditional custard bases for all my ice creams (especially vanilla) which is basically the simmering of dairy tempered in with eggs, sugar, and added flavoring. This book, however, is continually keen on simmering the milk separately, tempering, re-heating, and folding in the cream. I think that it is a way more difficult process, especially when they expect you to start fooling around with "single cream" and "double cream."

I had asked my pastry chef at work what it meant and he said the reduction of heavy cream by half. Well...my cream failed to reduce so I Googled "what is heavy cream?" and discovered that it is something ONLY available in the UK. Thanks, Ms. Farrow & Lewis...I don't live there! I can't just get imported double cream whenever I feel like it! However, regular heavy cream is the closest I can get so I had to deal. I also couldn't get my grubby hands on any vanilla beans, so I had to sub for a tablespoon of vanilla extract.

Using a small knife, slit the vanilla pod. Pour milk into heavy saucepan, add vanilla pod, and bring to almost boiling. Remove from heat and leave for 15 min to allow flavors to infuse. Scrape seeds out of the pod and into the milk. Whisk yolks, sugar, and corn flour together until thick. Temper milk into egg mixture and return to pan. Cook until thick, then chill. Fold in cream, and churn until thick. Freeze overnight or until ice cream holds a scoop shape. 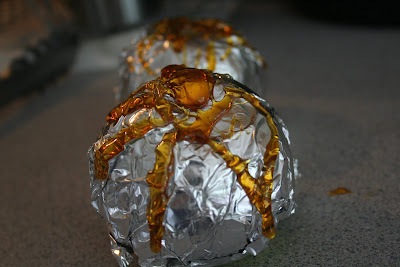 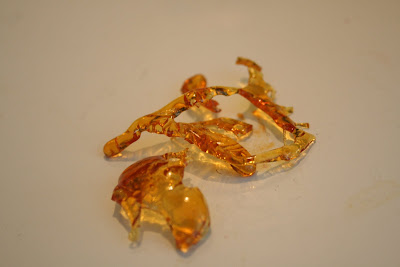 I decided I'd also try making spun sugar baskets on page 48. Basically, you put foil around some fruit (I used apples) to use as a mold, grease the foil, and drizzle caramel over it. However, the caramel hardened wayyyy too fast, so by the time I finally got to drizzlin', it hardened to the spoon! I think I'll have to try it with a bigger batch of caramel next time, because I literally only ended up with some random caramel shapes. We'll see what happens with the next couple recipes.