First off I'd like to thank everyone for voting for my Matcha Mint Chocolate Chip Ice Cream in the Foodista book contest! Still a couple of months left of voting, and since I have recently left the world of social media I could really use your help! If you could just follow the directions on the sidebar, I would love you foreverrr!

Now onto the important stuff!

Having not purchased groceries in about a month, I have been having ice cream experiment withdrawals again. With all my business planning for the future Zoey's Ice Cream Cafe I have been in major research mode trying to find the very best recipes for vegan ice cream base. Of course, I can't remember where I found this information (if I did I would credit, I promise!), but in the midst of all my searching I found a beautiful concept: Cashew based ice cream. What? Uh..yeah. Basically, you soak cashews in your desired liquid (coffee, tea, juice, milk, fake milk, whatevah) 1:1 ratio, add some sweetener, additional flavoring, allow to soak for 4 hours, and blend. It makes this amazingly milky base that is absolutely incredibly. No joke. Luckily, I happened to have everything I needed right in my cupboard!


Of course, when I get an idea in my head, I can hardly wait more than 10 minutes before I do something about it, so my ice cream had a slightly different texture...however, being so minor of an issue, I have zero doubt that the texture would be been amazing had I given the cashews the full 4 hours to absorb the liquid. Don't be an anxious-Agnes like me, give it the full four, you won't regret it.

Even though cashews don't have a tremendously overpowering flavor, I still wanted to try out one of my more powerful ideas on this base. What is more intense than coffee and chocolate, right? I manipulated the original 1:1 ratio to suit my needs- because I wanted to get the milky aspect of the "latte" into the ice cream. 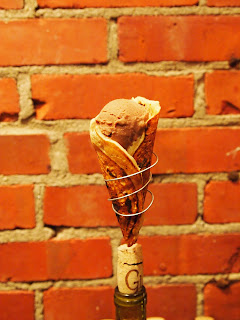 cover and refrigerate for at least 4 hours.

While the base is soaking, you can make the caramel. I recommend using the caramel recipe at A Vegan Ice Cream Paradise , however, for convenience sake I just used the almond milk (or whatever milk you plan to use) and I also left out the arrowroot. Allow to cool.

After the base has soaked for four hours, put in blender and puree until cashews are full pulverized. You should hardly be able to see little specks of cashew- this could take a few minutes. Strain the mixture, but do not push the grounds through the strainer- simply allow the liquid to pass through (you may stir the contents of the strainer to allow liquid to pass through, just don't force the cashew pieces through the strainer). Churn for about 15-20min or until relatively firm. Turn of your machine and gently fold in your chilled caramel. Freeze overnight or until firm.

I really wanted to serve this one in cones, but have never had any luck with them. I found a recipe at Cupcake Project and decided to make it my own by veganizing it 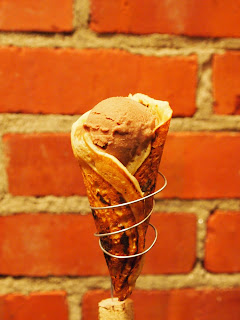 Whisk all ingredients together and allow to sit for about 15-20min.

For the actual cookery of the cones, I didn't have the spare funds to invest in a waffle-cone-maker so decided to make a "pancake cone," if you will, by pouring the batter into a very hot cast-iron pan. I know it would turn out better in a real waffle iron, but this certainly worked fine! If you choose this method, just make sure you spread the batter as thin as humanly possible, and be careful not to tear the cone when you flip it. They are a little thicker than the standard cone but they are also mighty delicious.

All in all, I would consider this a major "check" in the success column! I think I will conducting a lot more cashew-based expirements this summer! AND! I officially have my first recipe for Zoey's :D