I found what seemed to be an intelligent and simple recipe peanut butter gelato and decided to try it out. I have been finding it incredibly odd that peanut butter cannot be used as a fat in the ice cream process, because that's quite literally what it is. Instead, peanut butter commonly makes ice cream hard and annoyingly difficult to scoop.

The recipe tastes awesome, but you have to wait like 15 min before scooping...not my favorite situation. I would like to be able to make a peanut butter ice cream that it just as smooth and soft as any regular vanilla ice cream. In order to do that I am going to have to utilize more fat in a way that will offset the odd chemistry of the peanut butter. Which will be incredibly difficult if I still want to make it vegan. 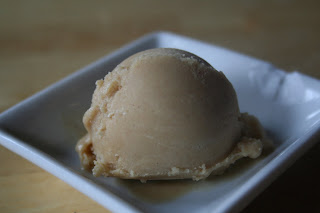 Combine all ingredients in a bowl and strain. Freeze mixture for about 10 min before churning. Pretty. Freaking. Easy.

I'm wondering if maybe it would be softer if I made peanut butter banana or some other combination instead. Maybe the addition of other ingredients would cancel out the awkward peanut chemistry...though realistically I think it would just make the desired outcome more difficult to achieve. I've seen a few recipes that add cream cheese which must soften up the peanut butter, but that wouldn't work in a vegan recipe. This is one that I'm going to have to play with a bit, but I definitely don't think it is going to be impossible. I also have a few more raw/vegan ice cream recipes up my sleeve to try out at a later date so you might wanna stay tuned.